In Review: Matt Boehler sings Rautavaara's "Viglia" at the Cathedral of St. John of th

"...well, it says nothing against those four soloists, but the solos here were above all (below all?) written for bass. Perhaps basso profundo, but more likely the bass of the Russian Metropolitan. Rautavaara was influenced by the Russian church, but he also confessed to the influence of Prokofiev’s music from Ivan the Terrible. And here, bass Matt Boehler showed not only the widest range, but some low notes (a low C? Or B flat?) that were clear and sometimes haunting" -Conce 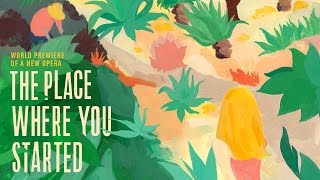 "It is a rare day when a college music department presents the world premiere of an opera, and even rarer still that such a production would be timely, relevant, and superbly done, but Portland State University’s opera program brought it all to fruition with its performance of The Place Where You Started on Friday, November 18th at the Lincoln Hall Studio Theater. Written by Mark Lanz Weiser with a libretto by Amy Punt, The Place Where You Started deftly handled themes that d

"Rebecca Ringle as Maddalena has a voice as luscious as a vocal mink stole and is every bit as elegant. A perfect contralto, she is sultry and seductive and had by far the best acting chops on stage." -MD Theater Guide Read full review.

"Mezzo-soprano Amanda Crider, in her BLO debut, spiked her voice with a steely edge as the Waitress who becomes Eddy’s wife. However, the best moment for both women arrived when they oozed together in a grotesque burlesque, playing a kinky, two-headed Sphinx that Eddy vanquishes near the end."- The Boston Globe Read full review. "Mezzo-soprano Crider is the true star here, making her BLO debut, particularly in a sex-charged fever dream by Eddy where she crawls around and on t

In Review: Catherine Martin in "Les Troyens" with the Lyric Opera of Chicago

"Baritone Michael Mayes as Older Jim sucked the breath out of the room. More than once. Older Jim's character is the most complex, having endured physical and emotional torture as a POW only to return home for a emotional torture on a different plane. Although Older Jim does not expressly sing, at any point, "Why did I go through all of that? What am I going to do now? If I got through nine years of torture, why can’t I get through this?" Michael Mays gives us all of that sub

Cheers for Dana Beth Miller in her "powerhouse" Hérodiade with Washington Concert Opera!

"mezzo-soprano Dana Beth Miller, stepped into this challenging role with aplomb for a striking company debut. Hérodiade requires both force and expressive beauty, a spiteful villain with a tender heart. Miller had the searing vocal power, a dramatic laser beam of sound she deployed in her first appearance. The top of the range in the first scene, A-flat and then A-natural on the shouts of “Hérode,” was strong if a bit strident. Miller gets marks for audacity for braving even